Cool FM presenter, OAP Freeze shared the story of what he was doing during his first 6 months of working in a radio station in the 1990s. 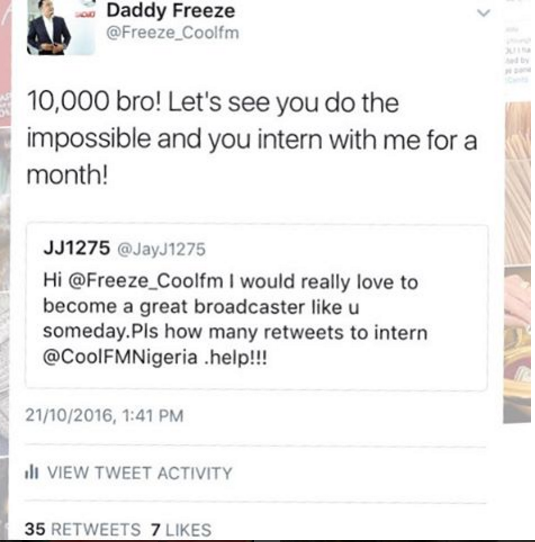 The message he shared was triggered by a Twitter user who wanted to do an internship with him. Read after the cut...

I gave him an impossible task, but I love his spirit so please encourage him by helping him retweet so he can make the 10,000 retweets. He has to earn it, most people don't understand what it takes to be a broadcaster, I have heard "is it not to talk on the radio?" It takes a whole lot more. For my first 6 months on air, all I did was "o'clock" six hours a day, five days a week on an AM station. When it's 6pm for instance, the main presenter would say 'it's 6' and I would say "o'clock" that was all I was required to say for an hour, then again at 7pm he would say, it's 7 and I will say "o'clock", repeating this every hour, never saying a single word more till my shift for the day ended. Was I sitting idle for the remaining 59 minutes 56 seconds? Of course not!!! I was buying zobo and buns, photocopying stuff and going to and from the news room running office errands, awaiting my next stint on the radio, where my services were needed to say "o'clock". This was all I did for 6 months, in the 1990s before I was considered fit for the radio. Since we are in the social media era, let him say his "o'clock" via Twitter and earn his internship. 😎