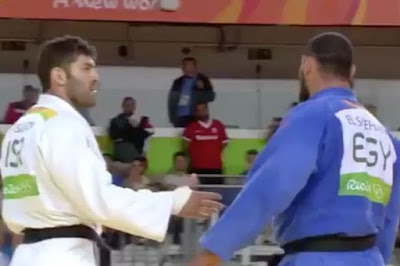 Egyptian judo player Islam El Shehaby has been sent home from the Rio Olympics in disgrace after refusing to shake the hand of his Israeli opponent after their bout. El Shehaby lost the fight to Or Sasson on Friday and was reprimanded by the International Olympic Committee for his actions.

The IOC acknowledged that the rules of judo do not oblige players to shake hands but said El Shehaby's behaviour went against the Games' "rules of fair play" and "spirit of friendship".

"The Egyptian Olympic Committee has also strongly condemned the actions of Mr Islam El Shehaby and has sent him home," the IOC said in a statement. "The President of the National Olympic Committee issued a statement saying they respected all athletes and all nations at the Olympic Games."

After Sasson defeated El Shehaby and the pair retook their places in front of the referee, the Egyptian backed away when Sasson bowed and approached him to shake hands. 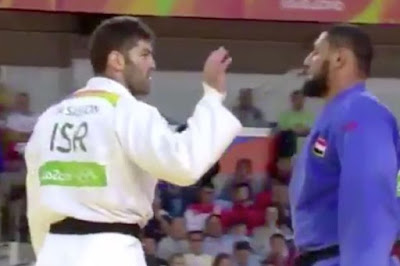 When called back by the referee to bow, El Shehaby gave a quick nod before walking off amid loud boos from the crowd .

"The Disciplinary Commission (DC) considered that his behaviour at the end of the competition was contrary to the rules of fair play and against the spirit of friendship embodied in the Olympic Values," the IOC said.

"The DC issued a 'severe reprimand for inappropriate behaviour' to the athlete. It noted....the shaking of hands after a match is not in the competition rules of the International Judo Federation."

"As well as a severe reprimand, the DC has asked the Egyptian Olympic Committee to ensure in future that all their athletes receive proper education on the Olympic Values before coming to the Olympic Games," the IOC said.