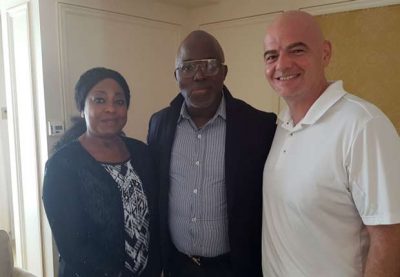 The duo was received by the President of Nigeria Football Federation (NFF), Amaju Pinnick, as well as several members of the Federation’s Executive Committee and management staff.

Infantino and Samoura were treated to a brief display by a cultural troupe on arrival at the Nnamdi Azikiwe International Airport, before a session of photographs with the NFF members. They were however unable to stay longer for any contact with others not within the NFF family as security was
tight around them, with no opportunity to speak with the media.

On the sidelines of the airport reception were a few placard-carrying youths, who were however kept at bay by security men who confiscated their placards few minutes before Infantino’s arrival.

The News Agency of Nigeria (NAN) reports however that the youths looked quite harmless, as their placards bore messages of support for the Pinnick-led NFF. The FIFA team were to be treated to a welcome cocktail at the Transcorp Hilton later in the evening.

NAN reports that Infantino is visiting only Abuja, according to the itinerary released by the NFF on Friday. He will pay a courtesy call on President Muhammadu Buhari at the Aso Rock Presidential Villa on Monday.

The FIFA President, as well as Samoura, will be led to the Villa by the Minister of Youths and Sports, Solomon Dalung, and Pinnick.

Also on Monday, Infantino and Samoura are scheduled to be guests at an under-13 exhibition football match at the Abuja National Stadium. They are to later attend a corporate dinner with a legion of Nigerian political heavyweights and captains of industry at the Transcorp Hilton.

The FIFA President will return to Switzerland on Monday night, while the Secretary General will depart Nigeria on Tuesday. Details later. 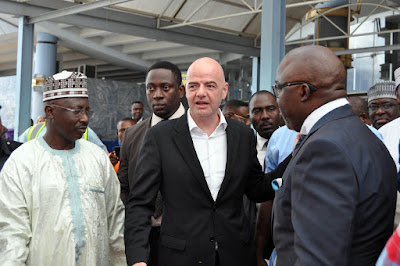 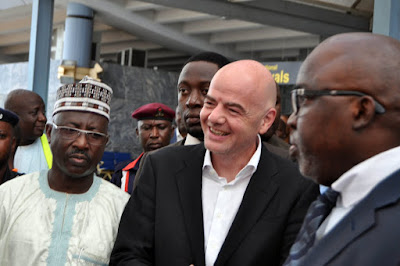 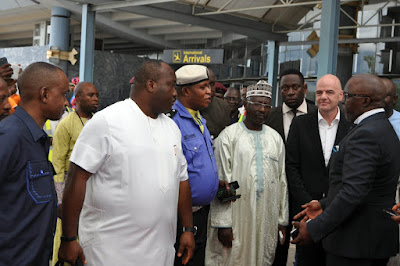