The boy, Abdulgafar Ajenifuja, 15, was said to have fled their Ikorodu, Lagos residence, after the incident, appealing to the public to save him and his siblings from their “violent’ mother.”

According to a Twitter user, @Arican88, who spoke to the boy, the woman used her high- heel shoe to inflict a deep cut on the boy’s head on Friday.


Abdulgafar, a Senior Secondary (SS1) student of Homat Group of Schools, Ikorodu, was reportedly studying for some practical tests they had on Saturday when his mother asked him to go and wash plates.

“Gafar cried to the press on Saturday and showed the scars of his mother’s beatings all over him. He said that it is the same with his younger ones.
“He pleaded saying ‘please take me away from my mother before she kills me. I was very brilliant before now and I was happy with my father’s family members around me but now they are far away because of my mother.
“During the interview, he said that his mother gave him a deep cut on his head on Friday because she ordered him to wash plates but he told her to give him more time to study for the practical he will be having the next day.
“Also, he said that his mother’s behavior towards him and his younger ones, is absurd. She treats them like she is not their biological mother,” Arican88 wrote. 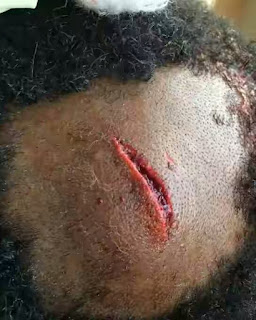 He said that before the incident, some neighbours reported her behavior towards the children to Ikorodu Ojogbe welfare. She was monitored for weeks and discovered to be a bad mother. The children were taken from her but she found her way and got them back.

“One of the neighbours also said that Iya Gafar is a disgrace to motherhood. The society should not allow this type of a woman to be responsible for a child.
“A woman who can fight the whole members of her husband’s family and force them to leave their father’s house is capable of doing anything to the children to force them out of their father’s house too,” he wrote.