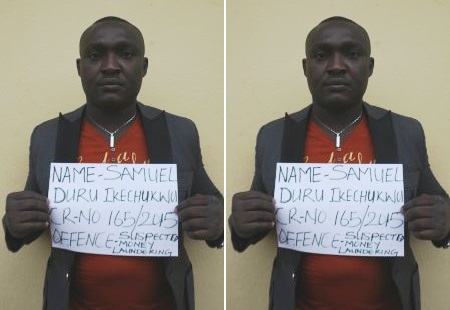 A man convicted of money Laundering by The Economic and Financial Crimes Commission, EFCC, Samuel Duru has been charged before Justice M.N Yinusa of the Federal High Court, Enugu, for failure to declare $86,000.00 out of $96,000 in contravention of Section 12 of the Foreign Exchange (Monitoring and Miscellaneous Provisions) Act, 2011.

The accused was arrested by officers of the Nigeria Customs Service at the Akanu Ibiam International Airport, Enugu while travelling to China in December 2015 and was subsequently handed to EFCC for further investigation and prosecution.

When the case came up today, Mr. Duru pleaded guilty to the one count charge preferred against him.


The defence counsel, Ikuka Kennedy, pleaded with the court to tamper justice with mercy since the convict had shown remorse and was a first time offender that had no past criminal records.

Justice Yinusa subsequently convicted and sentenced the accused to six months imprisonment from the date of arrest.

He further ordered that the undeclared $86, 000 be forfeited to the federal government, while the $10,000 and his international passport be returned to the convict.