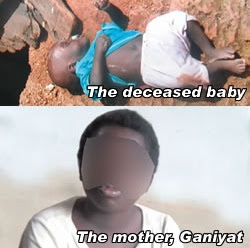 A 20-year- old woman, Ganiyat Salawudeen, is currently in police custody after she was arrested for throwing her five-month-old baby inside a well, where she was residing in her motherâ€™s family house at Alagolo area, Oja Oba, Ibadan Nigerian tribune reports that, Ganiyat threw the baby, whose name was given as Timothy Odugbemi, into the well at about 8.30p.m on Monday November 5, after which she raised the alarm that she could not find her baby. After a search by family members and neighbours, which extended till the following morning, Ganiyat was reported to have confessed to throwing the baby inside the well after much prodding. People were said to have rushed towards the well to see if it was true and it was a shocked crowd which beheld the still body of the tot when he was brought out of the well. On hearing about the incident, the Divisional Crime Officer in charge of Mapo Division, Mr Bayo Ogundiran, reportedly led a team of detectives to the scene and arrested the mother, while the baby was taken to Adeoyo Hospital, Yemetu, where he was confirmed dead. He was thereafter deposited in the mortuary for autopsy. Ganiyat said she could not also explain what made her throw her baby in the well, expressing the belief that forces greater than her must have overwhelmed her at that moment. Narrating how the incident occurred, Ganiyat said: â€œOn that day, I bathed the baby in the evening, changed his clothes and we both went to bed. About 8.30p.m, I rose from the bed, carried the baby and took him to the back of my room window where the well is situatedâ€. â€œA spirit just came over me and asked me to throw the baby inside the well. I pushed the planks on the well aside, threw the baby inside and covered it againâ€. After some time, I told the tenant living in the house that I could not see my baby. He said he saw me moments before with the baby. I left my residence for my parentsâ€™ place at Oniyanrin area and told my mother that I could not find my baby but she kept asking me where I kept the child. â€œThe following morning, many people came and were shouting at me, asking me where I threw the baby. An elderly man in our family then came to me, cajoling me to tell him where the baby was. Then I told him that the baby was in the well. While some people rushed towards the well, others started beating me with horsewhip, cane and different objects. When the baby was brought out, he was already dead. A police patrol van came and I was taken to the police station.â€ Ganiyat, who said she was an apprentice learning fashion designing, disclosed that she was impregnated by one Kehinde Odugbemi, who was already married, and that she delivered the baby on June 4. She added that the man could not be traced until the day of the naming ceremony when he came in the evening to christen the child. She said Odugbemi also came on June 12 to give her N1,000, adding that that was the last time she set her eyes on him. Ganiyat was said to have given birth to a boy before the birth of the deceased baby but could not get any man to claim the child. The boy, who is said to be three years old, is being taken care of by Ganiyatâ€™s mother. Source: