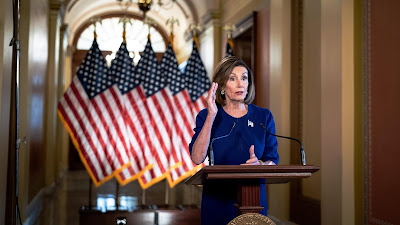 Speaker Nancy Pelosi announced on Tuesday that the House would initiate a formal impeachment inquiry against President Trump, charging him with betraying his oath of office and the nation’s security by seeking to enlist a foreign power to tarnish a rival for his own political gain.

Ms. Pelosi’s declaration, after months of reticence by Democrats who had feared the political consequences of impeaching a president many of them long ago concluded was unfit for office, was a stunning turn that set the stage for a history-making and exceedingly bitter confrontation between the Democrat-led House and a defiant president who has thumbed his nose at institutional norms.

“The actions taken to date by the president have seriously violated the Constitution,” Ms. Pelosi said in a brief speech invoking the nation’s founding principles. Mr. Trump, she added, “must be held accountable — no one is above the law.”

She said the president’s conduct revealed his “betrayal of his oath of office, betrayal of our national security and betrayal of the integrity of our elections.”

Ms. Pelosi’s decision to push forward with the most severe action that Congress can take against a sitting president could usher in a remarkable new chapter in American life, touching off a constitutional and political showdown with the potential to cleave an already divided nation, reshape Mr. Trump’s presidency and the country’s politics, and carry heavy risks both for him and for the Democrats who have decided to weigh his removal.