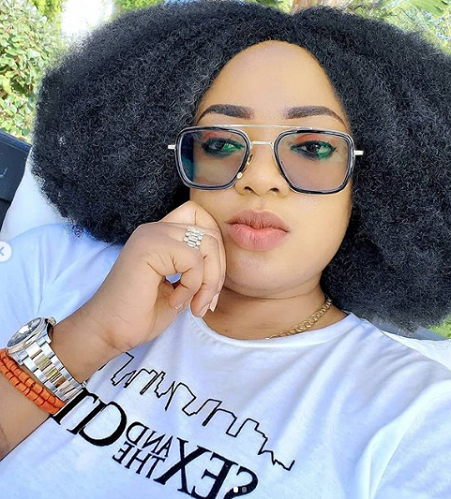 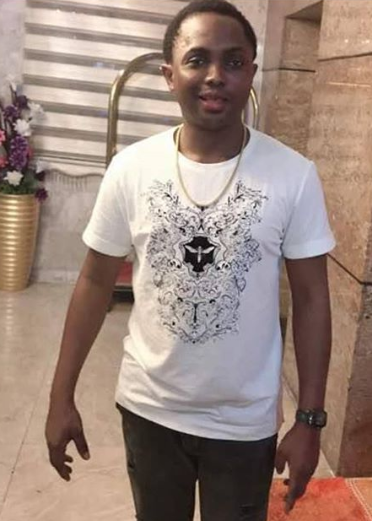 Nollywood actress Tayo Sobola has called out an alleged fraudster, who she simply named as IDRIS.. According to the actress, senior actor, Saidi Balogun and Mustifa Sholagade, another actor had called her and told her there was an offer for her to join them on a trip to Hajj which will be sponsored by the said Idris.

She said on meeting them, they also told her, Idris wanted her to be his company's brand ambassador, but she refused. She accepted the hajj trip tho, which she posted on her instagram page. Shortly after that, Idris got about N4.5m from her contacts and another N500,000 from Mustipha's contact and disappeared. According to Sobola, she didn''t want to put this out, but she was left with no choice after trying to get hold of him for MONTHS.

She also tagged his girlfriend, one Ms Abolaji Lawal, who has now DELETED her instagram handle. Her call out below...

''WANTED!!!!! Months ago i was approached by @saidibalogun and @mustiphasholagbade to go on Hajj/mecca trip with them sponsored by this guy named IDRIS.
''I was talked into becoming an ambassador for his company and i refused immediately. After much questioning from me to @saidibalogun and @mustiphasholagbade ,they assured me that they know him well and he's not a scammer. Then i accepted the offer of going with them to Hajj. Now, i was sent a flier to post on my page which is suppose to be the proper procedure to be taken. Now, to cut all long stories this guy took money from some of my contacts and since then he has neither called anyone /picked up calls nor refunded the money he collected . He's nowhere to be found.

''Mr @saidibalogun i have been calling and messaging you in the last few months please and please , kindly provide this guy you claim to know. He needs to refund the money he took from my contacts .

''I have tried my best to keep this off the internet. This will be my first move on this, dont test my patience!!! Please help me repost this ooo!! Atleast if you cant provide him , maybe the internet will help me. His girlfriends page is @abolajilawal22 and she has also been claiming not to know his whereabout.' 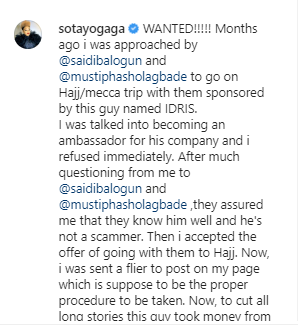