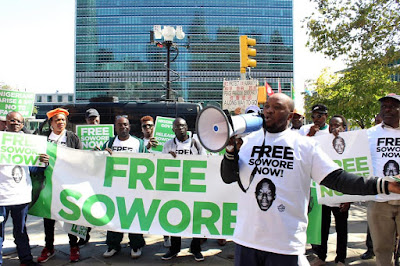 A protest calling for Omoyele Sowore’s release from DSS detention will be staged in New York tomorrow, 24th of September, 2019.

The protest will be the second in the city, to draw attention to the plight of the political activist and publisher of the online newspaper, Saharareporters, who is currently being detained by DSS.

Last week, a protest was staged in front of the Nigerian Embassy in New York. The second protest will now hold as President Buhari visits the city, to attend the United Nations General Assembly.

The Headquarters of Sahara Reporters is located in New York.