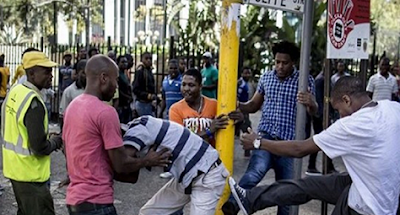 The President, Nigerian Union South Africa, Adetola Olubajo, has said the group may head to the International Court of Justice in The Hague, Netherlands, over the xenophobic attacks on foreign nationals, including Nigerians, in South Africa.

Olubajo, who spoke to Sunday Punch in a telephone interview, said they might file charges against the South African government in South Africa before heading to the ICJ if justice was not served.

He said, “The international law that is binding Nigeria, South Africa and all the (other African) countries should be invoked because this is happening time and again. It is not a one-off thing.


“But I would prefer that we start internally by testing it in the law courts of South Africa — the malicious damage of property and looting. If that doesn’t work, then we would head to the African Union and the ICJ.

“I don’t have any problem with that, seriously, because this thing (xenophobic attacks) has continued. If the attacks persist, then we will do what needs to be done.”

The Nigerian Mission in South Africa said although no Nigerian died in the latest attacks, over 50 vehicles and property worth millions of dollars owned by Nigerians were vandalised, burnt and stolen.

The Nigerian Consul General in Johannesburg, Mr Godwin Adama, said this while reacting to the xenophobic attacks on Nigerians and other foreigners in Pretoria and Johannesburg on August 28 and September 1.

The crisis resulted in the death of five foreigners, as well as the looting and burning of property.

At least 502 Nigerians have since been evacuated from South Africa in two batches.