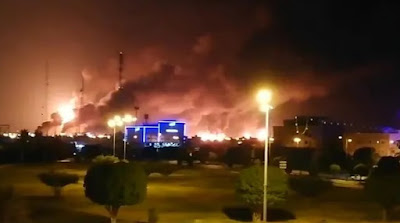 A military spokesman for Yemen’s Houthi rebels claimed responsibility for the strikes.

Yahia Sarie made the announcement on Saturday in a televised address carried by the Houthi movement’s al-Masirah satellite news channel.

He said the rebels had sent 10 drones to attack the Abqaiq oil processing facility and the Khurais oil field. He said attacks against the kingdom would get worse if the war in Yemen continued.


“The only option for the Saudi government is to stop attacking us,” he said. A Saudi-led coalition has been at war with the rebels since March 2015.

It was unclear whether there were any injuries in the attacks.