Actress Jailed For Paying $15,000 To Have Her Daughter's SAT Result Upgraded

Actress Jailed For Paying $15,000 To Have Her Daughter's SAT Result Upgraded 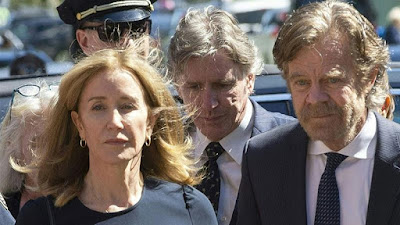 Actress Felicity Huffman, the first parent sentenced in a wide-ranging United States college admissions cheating scandal, was given a 14-day prison term and apologised for her actions on Friday after pleading guilty to paying to rig her daughter's entrance exam.

"My first apology is to you," Huffman told the judge immediately before the sentence was issued.


"I realise now, as a mother, that love and truth must go hand in hand, and love at the expense of truth is not real love," the actress said. "I will deserve whatever punishment you give me," she added.

Huffman was released from court after the judge ordered her to report to prison on October 25.

Prosecutors had recommended a sentence of one month behind bars after Huffman tearfully entered a guilty plea in May to conspiracy related to her payment of $15,000 to have someone secretly correct her daughter's answers on the SAT standardised test used for college admissions.

Huffman's attorneys, calling the actress "remorseful" and "deeply ashamed", had urged the judge to allow her to remain free on one year's probation, complete 250 hours of community service and pay a $20,000 fine.

Huffman and her husband, actor William H Macy, looked sombre when they arrived at the federal court, holding hands, before the sentencing.

Huffman is among 51 people charged in a vast scheme in which wealthy parents were accused of conspiring to use bribery and other forms of fraud to secure for their children admission to prominent US universities. These schools included Yale, Stanford, Georgetown, the University of Southern California, the University of Texas and Wake Forest.