Touching Tale Of Salawa Abeni... How She Lost Her Son & How It Paralysed Her For 6 Years

Touching Tale Of Salawa Abeni... How She Lost Her Son & How It Paralysed Her For 6 Years 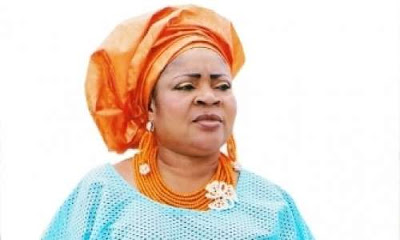 No wonder little or nothing was heard about Ibiwunmi Salawa Abeni for some years until lately. Salawa in an exclusive chat with LoveHaven Magazine,  disclosed she was on sick bed for 6 years! Paralysed actually! And it was shortly after she lost one of her sons, Olanrewaju. She also spoke about how friends deserted her and glad God finally restored her. It's such a touching story, but thank God it has a happy ending!

Why were you off the entertainment scene for some years?

I was ill for like five or six years. It started in 2008 and I didn’t recover until six years after. I was not performing on stage and other social events. Suddenly, I became terribly ill and couldn’t go out. I could not think of work because I could not walk—I was paralysed. All I thought of then was getting back on my feet. I kept praying to Allah to help me catch up with the lost years. Continue...


What was the nature of the illness?

I cannot really explain what happened but it was paralysis and was extremely bad. I could neither walk nor do anything. I thank Almighty Allah because not everyone could go through what I went through and still survive. Thank God for my siblings, my children, my band boys, Asiwaju Bola Ahmed Tinubu, former Governor Fashola and now Governor Ambode, who later took the responsibilities upon him after my recovery. To be out of work as an entertainer for six years is no joke. My band boys stood by me and they didn’t go! It’s not easy to hold down band boys for five/six years and think they would still work for you.

But what was going through your mind on your sick bed?

Then, I kept asking God and myself how was I going to make it again? How and when would I recover? Would I ever walk again? Is this how Ibiwunmi Salawa Abeni would end? Would everything be restored again? It was a trying time because I sold all that I had due to the illness.

Did you call out to friends and fans?

The illness started briefly and we all thought I would be fine in no time. Of course I had friends and initially I didn’t even think of calling out because I thought it would soon be over. But when it became unbearable and I started selling off my things—houses, cars, jewellery etc— I started calling out to friends. It was a challenging time for me but thank God, I’m fully back and restored now.

What do you think must have triggered off the illness?

Well, I think it started when I lost my son, Lanre. I started having high blood pressure and then other symptoms cropped up. In my sick bed, I knew I would not die because my late mum, who was alive then would pray for me and say I would be the one to bury her and not vice versa. She died two years ago at 98 years old.

It must have been a tough time for you and your family?

Yes, it was. I started to sing as a teenager and I had hustled, suffered and when I was about feeding fat on the proceeds of my labour, the devil struck. I prayed and kept telling God that He should allow me eat the fruits of my labour. At a point, everything was exhausted including money. That was when I started calling people to give me money. Some responded, some didn’t and would ignore my call. They were like, ‘Salawa is ill, she needs money, that’s why she is calling.’ I cried but I kept trusting God.

What about your fans? Weren’t they worried that you were out of reach?

They became worried and kept sending messages via text messages and through the social media. I was flown abroad at a stage and when I returned and was still recuperating, I saw some of my fans who asked me if I was still singing again. I was hurt! I knew I was far behind but I kept telling God to help me. Many of my fans who knew me when I was a teenager, to becoming a wife, mother and now grandmother stood by me and said, ‘we would do everything to see that you don’t die with your talent.’ My children also stood by me. I prayed to Almighty Allah that after the death of Idris Olanrewaju, God should never allow me see the death of any child again. He should allow me eat the fruit of my labour—these children are God’s gifts to me.

How did you sail through this trying period?

God sent me helpers. I would forever remain grateful to Asiwaju Ahmed Bola Tinubu—he is a father. His mother, Mama Abibatu Mogaji was my mum. I knew mama when I was very young. I was at the bandstand when she was 70, 75 and 80 years respectively. Mama would cook and send stews and soups to me. Mama would give me money. She treated me like a child. As old as Mama was when she saw that I could not walk again, she would send people to pray for me and always checked on me. Then, there was Alhaji Ayinde Barrister, who was a pillar of support for me. I called and told him, ‘Dad, I slept and woke up seeing myself this way.’ I called him Daddy and he requested for my home address after the call. He came to my house and immediately he entered, I started weeping. Alhaji Barrister said, ‘Ibiwunmi, don’t cry because I know you would be the one to bury me, not the other way round.’ The father-daughter love between us has extended to his children, who love me to bits. He was a good father.

Did you reach out to other musicians?

Some ran away, some didn’t even pick my calls. After my recovery, some told me that they didn’t know where I was and could not locate me. During my illness, I learnt this— learn to help one another. It’s foolhardy to wait for a fellow artiste to die before donating money for burial or to give to the family. Render help while someone is alive and don’t shed crocodile tears at burial. I don’t pray for anyone to be ill or die—it’s terrible. But then, I never took offence in anyone. I was just praying to God to restore me.

Were you so close to your son that his death hit you to the extent of being ill?

The problem started when I lost Lanre. I lost everything with him— the volumes 1- 15 of my LPs are still with his late father’s recording company and none is ready to release them to me. His death was a big blow. I didn’t know I would survive. He was the only bond between his late father, Lati Adepoju, and I. My concern now is to get my career back. Though many of my fans know that I am back and they are supporting me, I don’t want my career to perish. I desire to be old and be a legend, whose music would outlive her. I am still a young woman, my children are still young but I want my career to soar and make impact in the lives of younger generations. I know Salawa Abeni is a talent that can’t be wasted.

After your recuperation, what and where was your first performance?

It was a burial party in Lagos. I was not feeling too fine but then, I managed and sat down throughout my performance. After the party I wept. I knew my voice was intact, the composition of songs was okay but I could not perform as Queen Salawa Abeni. I prayed and told God, ‘this is not Ibiwunmi, help restore my energy and vitality.’ God did that and I can now dance and stand throughout any performance.