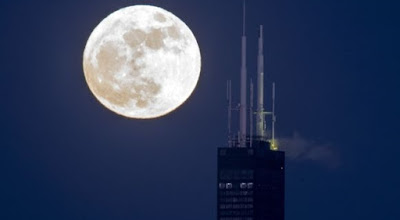 Have you ever seen a "super blue blood moon"? Nope, neither have we. But that's exactly what space agency NASA says will be viewable in the skies above the UK on the night of January 31.

A blue moon is when you have two full moons in the same calendar month, while a supermoon occurs when the moon is at a particularly close point in its orbit of the Earth, so it appears bigger.

And the term "Blood Moon" is used during a partial or total lunar eclipse. Occasionally during these eclipses, the moon can take on a deep shade of orange.

As dedicated stargazers will tell you, this is the first time the UK has experienced a blue moon lunar eclipse in 150 years.


"The moon’s orbit around our planet is tilted so it usually falls above or below the shadow of the Earth," explained NASA.

"About twice each year, a full moon lines up perfectly with the Earth and sun such that Earth’s shadow totally blocks the sun’s light, which would normally reflect off the moon.

"The moon will lose its brightness and take on an eerie, fainter-than-normal glow from the scant sunlight that makes its way through Earth’s atmosphere.

"Often cast in a reddish hue because of the way the atmosphere bends the light, totally eclipsed Moons are sometimes called ‘blood moons.’"

Blue moons happen, on average, every two and a half years.

It is the celestial phenomenon that gave rise to the phrase "once in a blue moon".

NASA explains that because there are roughly 29.5 days between full moons, it is extremely unusual for two full moons to ever "fit" into a 30 or 31 day month. It's also impossible to ever have a blue moon in February.