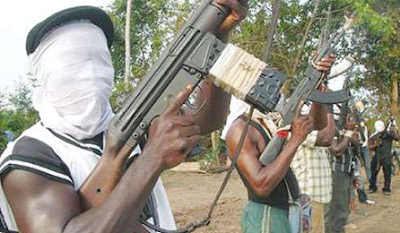 A woman who was simply identified as Mrs. Ifeyinwa Morah has reportedly been shot dead by gunmen suspected to be kidnappers in Aba, the commercial nerve of Abia State.

The Nation learnt that the incident happened in front of the residential quarters of late Morah, an indigene of Abatete, Idemili Local Government Area of Anambra State at about 7pm on Wednesday.

Sources around the area told their reporter that the woman was coming home from her husband’s gas plant along Aba-Umuahia-Enugu Expressway when some men wielding guns ordered her out of her car.

It was learnt that the gunmen were already waiting for late Mrs. Morah to enter her car in an attempt to drive off with her, but she resisted them.


A security source who pleaded anonymity told their reporter that the gunmen angered by late Morah’s resistance to be taken away, shot her and later drove away with the Sports Utility Vehicle (SUV) she was driving.

The source said that efforts were on to track down the gunmen as they have launched a manhunt on the hoodlums.

The family of the victim, until the time of this report is yet to be contacted for comments. But a source close to the family disclosed that the woman died few minutes after she was shot as a result of the blood she lost.

The source stated that the woman was planning to travel to the village this weekend and had just gone to the market some days before the unfortunate incident to shop few things that she would would be travelling home with.

However, residents of Aba and its environs have called on the State Commissioner of Police, the 14Brigade Commander and heads of various security agencies in the state to brace up to insecurity that is raising its ugly heads in the state in recent times.

They lamented the increase in kidnapping of persons and rate of armed robbery incidents within the city center and its environs especially within the festive period, stressing that the situation could deteriorate if not checked and nipped in the bud by the security agencies.