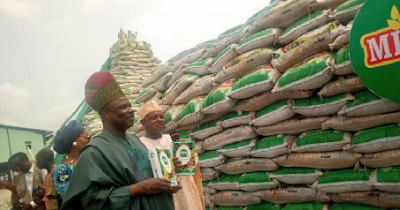 The Ogun State Government has launched its locally produced rice, known as Ofada rice, with a market price of N11,500.

While formally unveiling the rice produced and bagged in Ogun at the Asero Market in Abeokuta yesterday; the state governor, Ibikunle Amosun, said the rice production would boost food supply, reduce dependency on imported ones while the mill would create jobs for farmers in the state.

The rice, named Mitros Rice, packaged in 50kg bags, was produced at Egua land in Yewa South Local Government Area of the state, but the processing and packaging facilities are sited in Asero area of Abeokuta, the state capital.

Mr. Amosun said the rice farmers in Ogun would no longer need to travel far in search of milling facilities. He lamented that one of the biggest tragedies of the nation was her dependence on food imports to feed the population in spite of the abundant arable land and labour force.