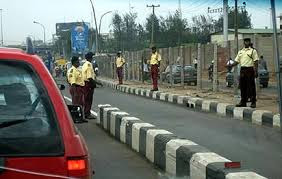 Bamidele Sheu, Ope Adisa and Babatunde Aluko were arrested following a complaint by a clearing agent, Babatunde Akinmolayan, that his container truck, marked AA 553 NGW, was illegally impounded on the Marina, in Lagos.

The trio allegedly demanded N80,000 bribe to release the vehicle.

Akinmolayan said he was accompanying the container truck on Monday to deliver goods at Walter Carrington Street on Victoria Island, Lagos.


He said the truck was stopped on the Marina, close to the State House by the three LASTMA officials and others in mufti, for driving at unauthorised hours.

Akinmolayan said they ignored pleas to release the truck,  which they eventually took to their yard at Olowu, where they demanded N80,000.

The vehicle was later released when the zonal head  intervened, and N7, 000 was given to some men in mufti.

In the same week, Jimoh Olaosebikan and Emmanuel Padonu were arrested by LASTMA surveillance unit at Okokomaiko and Mile 12.

Olaosebikan collected N20,000 from a female motorist for ‘making’ an illegal u-turn at Okokomaiko.

The motorist said “all explanations that other vehicles have been turning there before failed to convince him and efforts to see his superior officers in their office were frustrated by him, only for him to collect N20,000 from me before their surveillance team emerged from nowhere to arrest him.”

Padonu was picked up following a tip off  from the public that some traffic officials were conniving with men in mufti to arrest and collect money from commercial drivers.

Over 20 officials of the agency were dismissed this year for misconduct.