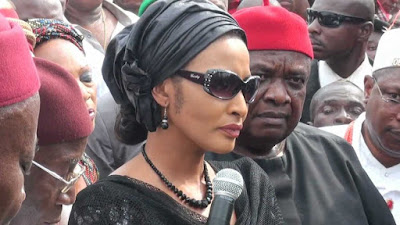 An Awka High Court, presided over by Justice Dennis Mmaduechesi on Monday adjourned till March 12, 2018 for a pre-trial conference on a matter involving  Bianca, the widow of the late Igbo leader, Dim Chukwuemeka Odumegwu Ojukwu and others over the family property.

The case involved the sharing of the late Sir Louis Ojukwu’s property.

Sir Louis Ojukwu, who died in 1966, was the father of late Dim Chukwuemeka Odimegwu Ojukwu, the defunct Biafra secessionists’ leader


When the matter was called up on Monday, counsel for the plaintiff, Mr. Ikenna Egbuna, (SAN), represented by Mr. Chuka Anatogu, informed the court that he was  just served with a motion which would  require sometime to reply.

Mr. Ebuka Ogwu and Mr. Christopher Ezeoka had put up an appearance for the defendants but parties agreed to an adjournment.

They also sought an order of the court compelling the defendants to account to the plaintiffs the management of the late Sir Louis Ojukwu’s property over the years.

The plaintiffs further asked the court to grant an order of the Will of Sir Louis Ojukwu to be resealed.

Justice Dennis Mmaduechesi while adjourning the case till March 12, 2018, ordered that hearing notices be served on Dr. Joseph Ojukwu, Bianca and the Probate Registrar, High Court of Justice, Awka.