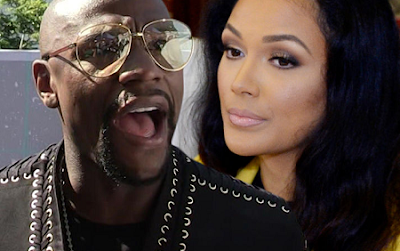 Boxing champion Floyd Mayweather has filed a lawsuit against his former fiancee Shantel Jackson, claiming that she had stolen cash from him and used his credit cards without permission to go on shopping sprees.

As TMZ Sports first reported on Friday, the 40-year-old undefeated fighter claims in his civil complaint that Jackson, 33, would make purchases with his money and then have them shipped to a secret location to cover her tracks.

Jackson is currently dating rapper Nelly, and the two are featured on the E! show The Platinum Life, which follows the exploits of famous musicians' wives and girlfriends.


According to court documents, during their time together, Jackson would praise Mayweather in public to gain his confidence  - and allegedly dupe him into thinking he could trust her.

'As a result of that confidence, Mayweather, who's education ended at eighth grade, did not audit or otherwise inspect either his cash or his credit card statements for theft by Jackson,' the documents state.

Mayweather only found out that Jackson had been allegedly taking advantage of him, according to the lawsuit, when a mutual friend told him she had been boasting about her alleged scheme.

Jackson, who is the inventor of the Shoe Gummi insoles designed for high heels, sued Mayweather in 2014, accusing the athlete of beating her during their relationship and later publicly humiliating her on social media by posting on Twitter a sonogram of her pregnancy and saying they broke up because she got an abortion.