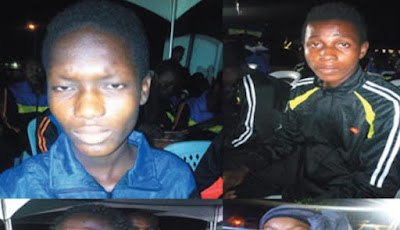 The time was 9.10pm. A Buraq Air’s Boeing 737 with tail number 5A-DMG landed on the tarmac of the cargo terminal of the Murtala International Airport and out came 20-year-old Clement Chibuzor, along with 149 other Nigerians whose ghoulish appearances told of the horrific experiences they must have experienced in Libya.

Over the past two weeks, Nigerians have added their voices to the global uproar over the exposed tales of slave trade, torture and killings of migrants in Libya.

Over 5,000 Nigerians have been repatriated from Libya by the International Organisation for Migration since the beginning of 2017.


Each time a new batch of returnees arrive, they bring with them tales of horror from the transit country, where they hoped to take the treacherous journey through the Mediterranean Sea.

Saturday Punch spoke with many of the returnees as they touched down on Thursday night. They told the tales of man’s inhumanity to man.

Chibuzor, a Delta State indigene, was just a teenager working as a Plaster of Paris artisan when his father met a trafficker, who told him he could get his son to Europe.

The young lad had worked as a POP artisan for eight months with little money in his pocket, his father told him not to worry about the money.

“I never thought about going to Europe. My father was the one who brought the idea. He sold his land and raised N450,000 which he gave to my ‘burger’ (trafficker). He did not tell my mother until I was already in Libya,” Chibuzor said.

The young man spent 18 months in Libya. He left the country, a hopeful man. On Thursday, he returned like a mere cargo, thankful to be back to safety.

As he stepped off the plane, Chibuzor looked nothing like a 20-year-old.

His hollow cheeks told of starvation while his skin told of suffering in disease-ridden cells.

“After many of my co-travellers died in the desert, I was kidnapped as soon as I got to Libya. I was in prison for four months until my father sent N300,000 for my release.

“In the prison, our food was a piece of bread every day. When I got out of the prison. I was on the street one day when I met a Nigerian who promised to help me. I worked in his house for some weeks until he sold me to a gang. They kept me in a cell. I was there for a very long time. I cannot count the number of people who died in the cell.

“The police were raiding different places where black people were kept and I willingly surrendered to the police. That was how I got an opportunity to come back to Nigeria.

“While working on the streets of Libya, if the gangs saw you, they would grab you and put you in a cell. They put you in a cell with many others where you would either be sold or made to call your people to pay for your freedom.

“While I was trying to get money the to free myself from the prison, I spoke with my father two months ago. He then told me that if I had the chance, I should return home. I told him that I might die before I had the opportunity to return home because I saw people die every day.”

Many of the returnees who shared their experiences like Chibuzor, vowed never to attempt the dangerous journey again. But experts say that so far as there are few success stories amidst the deaths, some of the returnees may try again when the shock of their time in Libya wear off.

Kelvin Sunday, 21, an Edo State indigene, who returned with Chibuzor, told Saturday Punch that he was in Libya for seven months.

He spent N965,000 to get to Libya after raising the money with the help of friends and his my sister.

Sunday explained that a friend of his, who made it to Europe, convinced him to embark on the journey.

According to him, 41 of them set out in Kano for the journey through the desert but only 10 made it to Libya.

He said their fate was sealed when their vehicle developed an engine fault in the desert.

Sunday said, “We were in the desert for three days without food or water. We were drinking our urine to survive. It got to a point that when there was no more urine to drink, we started to drink fuel.

“When we got to Libya, I was working in my burger’s house. I spent two weeks there before I went to the seaside (in Tripoli) where we would cross. From Sabha to the seaside in Tripoli, I spent two weeks. On the way, some traffickers kidnapped us. They beat and loaded us into their Hilux van, but few of us jumped down and I broke my leg. I managed to escape as they were shooting.

“We spent two days in the desert again after that escape. We later saw a motorist whom we begged to help us get to the seaside.

“We were camped at the seaside for three months without any opportunity to cross through the seas. People trying to cross the sea told me to avoid Nigerians helping Libyans to sell people. But later our camp was raided by soldiers, who took us to prison.”

He had spent four months in the cell before luck smiled on him and IOM officials effected his repatriation along with many others.

Less than a year after Harrison Okotie, 35, got to Libya, he was kidnapped by some violent traffickers, who hit him in the eye with the butt of a gun.

He lost his left eye to that attack.

“Now, I don’t know if my wife and two children would ever recognise me when I get back home. I left Nigeria a whole man but I am returning with one eye,” Okotie said.

He explained that before leaving Nigeria in 2014, he worked as a painter after graduating from the Delta State University.

After paying N600,000 for the journey through the desert, he got to Libya where he was grabbed off the street by some traffickers who sold him for 2,000 dinars (about N529,000).

“When you got to the person you were sold to, he sold you again for double the previous amount.

“Many Nigerians have gone mad and cannot even say where they are in Libya right now. The day officials came to register us for repatriation, we were in a queue when one of the Libyan officials shot a Nigerian dead right there. They said he was trying to run, whereas he was desperate to return home.”

Another returnee, Esosa Osas, 25, who was a hairdresser before he left Nigeria, spent six months in Libya. She told tales of many women being raped.

“It is either rape or death. Nobody could refuse being raped,” she said.

A fellow Edo State indigene, Odion Saliu, 26, told Saturday Punch that the Nigerian trafficker who facilitated her trip lied to her.

She said, “She told me that once in Kano, we were going to take a plane to Libya. I was shocked when we were loaded into a vehicle.

“We spent nine days crossing the desert to Libya. I was kidnapped and sold at least three times before God brought me back to my fatherland. I am really thankful to God that I am alive.”

The Nigerian traffickers fueling the trafficking industry in Libya seems to have attracted the attention of the government.

The Senior Special Assistant to President Muhammadu Buhari on Foreign and Diaspora Affairs, Mrs. Abike Dabiri-Erewa, said there was a need for Nigerians to report human traffickers in the society.

She said the Federal government’s whistleblower policy against human trafficking would ensure a handsome reward for credible information about human traffickers .

“Traffickers must be prosecuted, must be arrested and they must be known. There is a whistle-blower policy by NAPTIP; report traffickers, they are amongst you’

An official of the Edo State task force on illegal migration, Mr. Okoduwa Solomon, told Saturday Punch that since November 7, the state had taken custody of at least 897 Libyan returnees who are indigenes of the state.

He explained that the exercise to help them resettle in Nigeria would continue so far as there were still Nigerians trapped in Libya.

“We are using the returnees to raise awareness about the dangers of illegal migration in Edo State,” he said.