Chechen Leader, Amid Reshuffles, Says Ready To Die For Putin 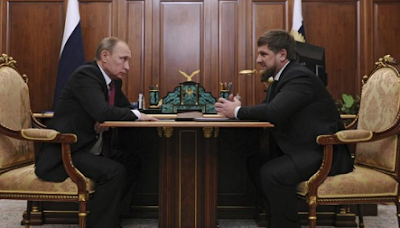 Ramzan Kadyrov, head of Russia’s Chechnya, said he was ready to die for Vladimir Putin and stand down, if ordered, ahead of a federal presidential election next year which has triggered personnel reshuffles that have put some politicians on edge.

Kadyrov, 41, spoke during an interview broadcast on state TV late on Sunday that showcased what the unpredictable former warlord regards as his main achievements and, to a stirring soundtrack, showed him boxing, riding a horse, and giving his views on everything from polygamy to gay marriage.

His comments looked like a tactic, one he has used before, to secure the Kremlin’s public approval, something he didn’t have to wait long for.

“Kadyrov has repeatedly said that he is, speaking figuratively, quite a consistent and committed member of Putin’s circle of adherents and intends to continue working where and how the president of the country orders him,” Dmitry Peskov, a Kremlin spokesman, told reporters on Monday.