Atiku Yet To Formally Inform Us Of His Exit- APC

Atiku Yet To Formally Inform Us Of His Exit- APC 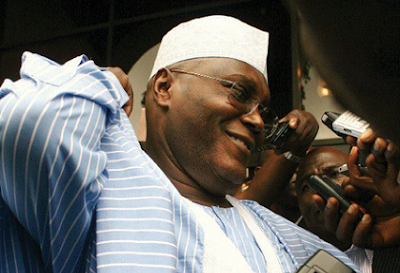 National Publicity Secretary of the All Progressives Congress (APC), Mallam Bolaji Abdullahi said the former Vice President Atiku Abubakar, was yet to formally inform the party of his decision to leave and seek his political fortune elsewhere.

Bolaji told newsmen at the party secretariat that party was yet to see any official notification from former Vice President Atiku Abubakar that he was leaving the party.

Reacting to the news of the former Vice President’s decision to leave the party, Abdullahi said if Atiku believe that his interest will be better served elsewhere, the party has nothing else to say than to wish him Goodluck.


He said in the coming days, the party will watch and see the number of people that will follow the former Vice President before it will know whether to worry or not, adding that a strong political party is not built in just one day.

He said “Politics is about interest, we have not seen any formal notification to that effect but base on what we have seen in the social media we can say all together is surprising but for us politics is all about interest.

“So, if the former Vice President feels that his interest is better served elsewhere, we can always wish him goodluck. For us, the task of building a political party is not a day’s job; its marathon and it takes many years and we will continue to improve on our system until we are able to get the kind of party that we want to really, really build.

“It takes many years to build a strong political party. In a new party, you find some people are happy, some people are not so happy and everybody would have to take their decisions at some point. So, we don’t have anything to say rather than to wish the former Vice President goodluck.”

Asked how Atiku’s exit will affects the fortunes of the party, Abdullahi said “a loss of fortune is in numbers. So, if we are able to see the number of people that followed the former Vice President to his new party that is when we will begin to worry. So, when we see we will know whether we need to worry or not. It is about number.”