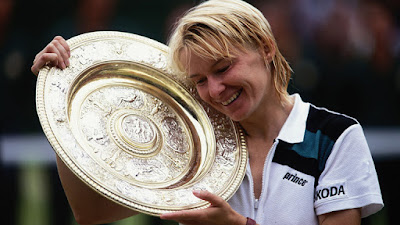 Former Wimbledon champion Jana Novotna has died at the age of 49. The Women's Tennis Association said Novotna, who had cancer, "died peacefully, surrounded by her family".

The Czech player had lost in the Wimbledon final in 1993 and 1997 before winning the Grand Slam tournament when she beat Nathalie Tauziat in 1998.

Novotna captured the hearts of fans when she burst into tears after losing to German great Steffi Graf in 1993 and was consoled by the Duchess of Kent.

"Jana was an inspiration both on and off court to anyone who had the opportunity to know her," said WTA chief executive Steve Simon.