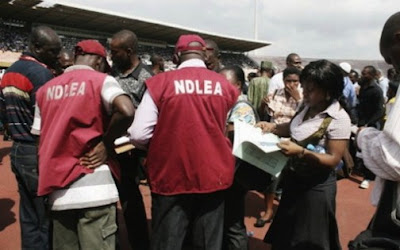 The State Commander of NDLEA, Maryam Sani, who disclosed this while at a briefing on it activities within the last three months, also said the agency has arrested about 108 suspects and seized 101.71kg of illicit drugs.

Sani said of the 108 suspects arrested, four were females, while 11 were students of tertiary institutions and secondary schools, with three of them underage.


She said: “During the period under review, 53.5521kgs of cannabis sativa was seized, 48.159kgs of psychotropic substances (Diazepam, Exol and Tramadol) were also seized, while 49.7 litres of cough syrup with codeine (translating to 497 bottles) were also impounded. The total of seizure is thus 101.71 kilogrammes.

“Ninety suspects were referred to our drug demand reduction unit for counselling session, out of which five are undergoing long term counseling.”

Sani called for the cooperation of government agencies, NGOs, traditional and religious institutions, parents and teachers to succeed in the fight against illicit drug trafficking and abuse.

He noted that “the threat of drug abuse is real, especially in the Northern region. It is a great danger to our youths.”