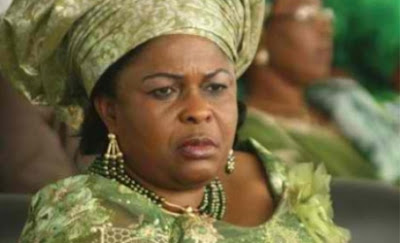 Justice Hadiza Rabiu-Shagari, gave the order following an ex-parte application filed by the EFCC and argued by its lawyer, Mr Rotimi Oyedepo, against the company.

In an affidavit deposed to by one Musbau Yahaya, the commission contended that between June 20, 2012 and November 15, 2013, the respondent fraudulently received a total sum of N1.2 billion, into its Diamond Bank account.


According to him, the sum was proceeds of an unlawful enrichment allegedly derived by Mrs Patience Jonathan, who was then a Permanent Secretary, appointed by the Bayelsa State Government.

The deponent also claimed that in a bid to dissipate the fund, the respondent allegedly opened an account with Stanbic-IBTC Bank, noting that out of the alleged proceeds of unlawful enrichment of Mrs Jonathan, the respondent transferred N350 million, from its Diamond Bank account to the account sought to be attached.

Oyedepo argued that there was a desperate bid to dissipate the funds, noting that the commission had traced the said N350 million, to the respondent’s account, now sought to be attached.

After listening to the submissions of counsel, Justice Rabiu-Shagari ordered the temporary freezing of the N350 million, belonging to AM-PM Global Network Ltd, at the Stanbic-IBTC Bank, pending the conclusion of the investigation on the account by the EFCC.