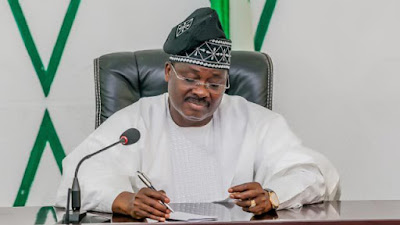 The angry looking old men and women started the protest from the secretariat of the Nigeria Labour Congress, NLC, and proceeded to the Nigerian Television Authority (NTA), Agodi Ibadan and later to the government secretariat.

The former teachers, under the aegis of the National Union of Pensioners in Oyo State, said they could not bear the pangs of hunger again after several months of unfulfilled promises by the state government.

The Deputy Governor, Chief Moses Alake Adeyemo and the Secretary to the state Government, Alhaji Olalekan Alli appealed to the aggrieved retirees saying the governor was out of the country.


The Deputy Governor said: ‘’We feel for your plight. However, the Governor has travelled out of the country at the moment, and I cannot do anything about your plight until the governor comes back.

The governor will grant an audience with your executives when he returns.” Speaking with Vanguard in a telephone interview, the state NLC chairman, Mr Waheed Olojede said the leadership of the labour union could not stop the aggrieved retired teachers from protesting because they have been suffering in silence for long.

According to him, several pleas made to the Oyo State Government to settle the arrears of pensions, which run from 17 to 56 months, have not yielded any results. The government paid them last in 2008.”

Olojede said: “We have made several efforts from the union to make the government settle the arrears but all meetings we have had so far have not yielded any results.

“So, when they gathered at the NLC secretariat this morning (yesterday), I could not stop them. They are being owed between 17 and 56 months.

Tell me, how you can stop them even when the government has not shown any positive action. Many of these old people have suffered and died waiting for their legitimate entitlements. You can’t believe that some of these pensioners receive as low as N3, 000, N4, 000 and yet they are not paid regularly.”