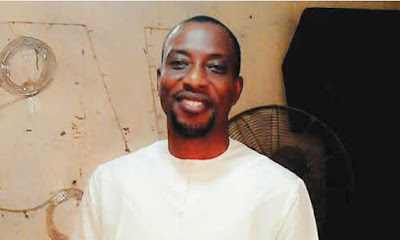 If there is one thing that Mrs. B. regrets most in her life, it is the day she walked into the Royal Heritage Church, Mafoluku, Lagos, for the first time.

Shortly after that day, with her teenage daughter in tow, she approached the pastor of the church, Tunde Daniel, a man in his 50s with two wives, and sought his spiritual help on the girl’s plan to become a model.

Mrs. B. told Saturday Punch that the pastor had told her he could make a super model out of the girl.

Because of the sensitivity of this case, Saturday Punch decided to keep the family anonymous. But Mrs. B. said the moment she approached the pastor for help was the day she lost control of her daughter, who is now 16 years old. For more than a year, Mrs. B said she was struggling to get a grip of her life and win her daughter back from the hold Pastor Daniel allegedly had on her.


From that moment on began a relationship that allegedly snowballed into a sexual slavery for Mrs. B’s daughter.

According to her, it got to a point that if she gave her daughter an instruction, her obedience would depend on whether the pastor agreed or not.

The girl would occasionally visit the married pastor at his 8, Owolabi Street, Mafoluku, Lagos.

Mrs. B said, “My daughter suddenly became distant and she no longer listened to me. Then, one day, she ran away from home. I was at my shop when she ran away and her siblings were with me in the shop.

“I got home and was expecting to see her. I became worried after a few hours, but I still did not see her. Neighbours also could not tell me where she was.

“It was while searching everywhere for her that I noticed the money I kept in the house had gone.

“I tried to call Pastor Daniel but could not reach him on the phone and I went to his house. When I got there, I was told he was not around and for four days, my daughter was missing.

“Few days later, Pastor Daniel brought her back home in the evening.  When I asked where she had been, she ignored me and when I asked the pastor, he shouted at me.”

Mrs. B. warned her daughter to stay away from the pastor but all she got in response was the rebuff.

According to her, Tunde continued to meet with the girl in secret.

Mrs. B. explained that unknown to her, the sexual abuse her daughter allegedly suffered in the hands of the pastor started in 2016 when the girl was still 15.

“She said that anytime she went to school, Pastor Daniel would pick her up there and take her to a hotel.

“One day in late February, 2017, I got a call from a hospital that said my daughter was in a critical condition. I did not know how she ended up in the hospital. At that time, I had lost control over her totally.

“When I got there, I was told that she had appendicitis and that an emergency surgery must be conducted to save her life. We were asked to look for N368,000. I called her father who was abroad, to inform him of the case and we quickly paid the money.

“It was when I saw the surgical scar that I became alarmed and I started petting her and told her to tell me what was going on. That was when she said that the pastor had impregnated her and that what I thought was the removal of her appendicitis was indeed abortion.

“I wanted to faint. I quickly confronted the doctors at the hospital and they told me that she was brought in by Pastor Daniel, who prevailed on them to say it was appendicitis. They said she had lost a fallopian tube. They said they were only concerned about saving her life.”

However, the apprehensive Mrs. B., who could no longer handle the matter on her own, contacted the Child Protection Network in Oshodi, who took over the case.

The Coordinator of CPN in Isolo and Ejigbo, Mr. Ebenezer Omejalile, explained that further investigation on the case showed that Daniel’s ministry was reputed as one dedicated to preying on both innocent girls and married women.

According to him, after the CPN took over the case and it was reported at the Makinde Police Division, Oshodi, Daniel tried to turn the case against the victim’s family and reported at the anti-kidnapping unit of the Lagos State Police Command that Mrs. B. colluded with some officers at the Makinde Police Division to kidnap him and force him to part with money.

“The pastor threatened the investigating police officer in charge of the case. He was so confident that nothing was going to happen on the matter. I realised that it was necessary for the Commissioner of Police to hear about the matter, so I wrote a petition to the CP on the matter.

“The woman called him ‘father in the Lord’ and trusted him with her daughter. Most shocking was the part that the girl had lost a fallopian tube. When we interrogated the girl further, we realised that the pastor had given her some drugs to abort the pregnancy, which led to the complications.”

Omejalile said his petition to the Lagos CP was to explain why the case was not a kidnap case as claimed by Daniel, but one that bordered on gross sexual abuse and child endangerment.

Meanwhile, to prevent further contact between the girl and Daniel, the girl’s family took her away to the South-East to stay with her grandmother.

During her stay in their hometown, Saturday Punch learnt that the family concluded that the pastor might have put the girl under a spell.

“She kept repeating that she wanted to have sexual intercourse with Pastor Daniel. We did our best to break her from the curse,” a family member said on condition of anonymity.

They did not divulge further steps taken to break her free from the purported spell.

However, after months on the case, Omejalile’s petition to the Lagos CP finally yielded results on Tuesday, November 7. Daniel, who had been walking the streets as a free man since the case was reported at the Makinde Police Division, was invited at the Gender Unit of the Lagos State Police Command Headquarters. He was subsequently detained as investigation and interrogation went on.

At the police headquarters, the girl, who was brought back from the East to give a statement, made more startling revelations.

Omejalile, who was present at the time said, “The girl said that anytime they had sex, he always recorded it. This is why we are worried at this point because we do not want such videos finding their way to the public. The girl said that he had a box in his room where he kept videos from different sexual encounters. The police said they would go and search his room soon.”

He explained that when they went to invite the pastor in company with policemen from the command headquarters, the girl was the one used as a bait.

Omejilale said, “We told her to put the phone on speaker and when the girl called him, he said he would like to see her and that he missed her. The girl said she could not come to his house but could meet him at work.

“The pastor works as a software engineer in a company at Oshodi. As soon as the girl got to his office, the pastor’s colleagues started greeting her as ‘Pastor Daniel’s daughter’. It was clear they were familiar with her. He was then informed that he was wanted at the police headquarters. He thought he could escape by placing a call to the policemen at the anti-kidnapping unit, whom he had reported to earlier. But he was told that he was being invited at the police headquarters by higher authority.”

Saturday Punch learnt that while being questioned at the police headquarters, the girl revealed that Daniel took her on a flight to Abuja at a point.

Mrs. B was asked why she was not aware of all these and how her daughter could embark on such long journeys without her knowledge, but the distraught mother said it was part of the reasons why she said she lost control of her daughter.

The pastor is still being detained by the police.

Meanwhile, the CPN has said once the prosecution of Daniel was underway, it would begin efforts in ensuring that the doctor at High Rocks Hospital, who carried out the abortion was investigated.

When Saturday Punch spoke with the head of the hospital, Dr. Femi Oloyede, an associate professor, he explained that the pastor brought the girl to his facility, claiming to be her guardian.

He said, “The man (Daniel) brought in the girl with ectopic pregnancy (development of foetus in fallopian tube) and we saved her. He said the girl was impregnated by her boyfriend. Our records are there to show what she was treated for. Who impregnated her was not the hospital’s concern. I was summoned when she was brought in and noticed she was in a very bad shape. She had to be resuscitated. I then said there was nothing we could do if her parents were not present even if he was the guardian as he claimed.

“The pastor then contacted the mother and she came in. We told her what was wrong with her daughter immediately. When we told them to make a deposit so we conduct an urgent surgery, they declined saying they were taking her to their regular hospital.

“I wrote them a referral and they left. They later came back in the evening when the girl’s situation had worsened.  They had to beg me to come from home to attend to her. We did the operation and she took about three pints of blood within a space of three hours. She was bleeding inside. She was even on admission for some days after the surgery. If anything was ever in doubt, a responsible parent would have asked.”

Oloyede said the age of the pregnancy could not be immediately determined but said he believed it must have been about six weeks old.

He also said there was no evidence that there had been an attempt to abort the pregnancy but that the victim’s fallopian tube ruptured as a result of the ectopic pregnancy.

The doctor explained that he would be happy to assist the police in their investigation.

The spokesperson for the Lagos State Police Command, Mr. Olarinde Famous-Cole, who confirmed that Daniel was still in custody and being quizzed, said the doctor would be invited.

He said, “The investigation will definitely involve the hospital. The pastor has made some confessional statements.

“Investigation is ongoing to determine where and when each of the alleged acts took place.Investigators would be conducting a search on the house of the pastor also.”