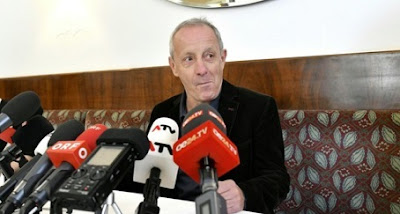 "I've always fought for strict standards and these standards also apply to me," the 63-year-old said in a statement.

The announcement came after news weekly Falter confronted him early Saturday with allegations of sexual misconduct.

A young woman told the newspaper that a very inebriated Pilz had groped her in 2013 at a major annual discussion forum in the western town of Alpbach.


"His hands were everywhere," she was quoted as saying by Falter.

The woman said two other forum participants eventually dragged the politician away.

Pilz said he could not remember the incident, but took the allegations "extremely serious". However, Pilz rejected claims made last week by a female Greens member who also accused him of fondling her on dozens of occasions when he was still with the party. He said he would fight the allegations in court.

Pilz is an old hand in Austrian politics, having co-founded the Greens party in 1986. He split in July and formed an anti-establishment party dubbed the "Pilz List" which won four seats in last month's snap election.

He said he would continue to advise the "Pilz List", made up of artists, academics and entrepreneurs.

The Austrian joins a growing queue of notable men from Hollywood to Brussels and London who face allegations of sexual harassment or worse.