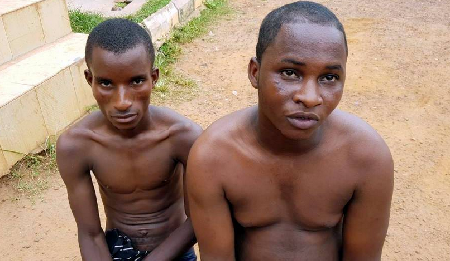 Two suspected kidnappers have been arrested by the Ogun State Police Command for allegedly kidnapping and killing their‎ victim.

Both the suspects and the victim are said to be herdsmen.

The Command’s Public Relations Officer, Abimbola Oyeyemi, said on Sunday that the suspects committed the crime on October 23 at Obada-Oko town of the state.

He said they also made away‎ with eight cows belonging to the victim.


“Two herdsmen suspected to be kidnappers and cattle rustlers have been arrested by men of Ogun State Police Command in connection with the kidnap and killing of another herdsman by name Taye Amodu,” he said.

“The duo of Hassan Amodu and Abubakar Abdullah kidnapped Taye Amodu on the 23rd of October 2017 at Obada Oko area of Abeokuta and equally made away with eight cows belonging to the victim.”

The suspects’ hideout was located same day following a directive by the commissioner of police, the spokesperson said.

Mr. Oyeyemi said the hideout in a thick forest was stormed by the operatives where the two suspects were arrested.

He said exhibits recovered from them are one pump action gun, four live cartridges and two cutlasses.

“On interrogation, they confessed to have killed the victim because he was struggling with them while they were taking him away and the body has been buried in a shallow grave inside the forest,” he stated.

He said the suspects will be prosecuted at the completion of investigations.