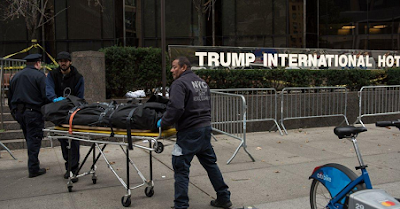 A man jumped to his death Sunday morning from the roof of Trump International Hotel and Tower, police have said.

Emergency personnel removed the body of Kyle Mulrooney around 8 a.m., about two hours after the 41-year-old man plunged 44 stories.

Mulrooney’s family has an apartment in the building at 1 Central Park West, near W. 61st St. The luxury hotel and apartment building is about a mile from President Trump’s New York City offices and triplex apartment in Trump Tower on Fifth Ave.


Mulrooney landed just behind the hotel marquee in the front courtyard of the property, not far from the sidewalk, and was declared dead at the scene.

Police continue to investigate the death, but they said there were no early signs of foul play.