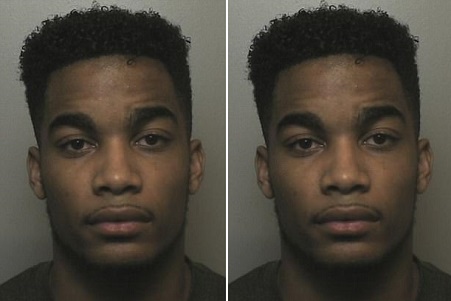 A university student raped a 12-year-old girl he met online after telling her he 'loved her' and wanted to 'make a sex tape'.

David Nwosu, 21, groomed the schoolgirl online and had sex with her during their second meeting.

Following the attack the maths and computer science undergraduate bombarded another girl with messages and begged her to send intimate photographs of herself.

Nwosu has now been jailed for five years and placed on the sex offenders' register for the rest of his life after a judge decided he was a danger to teenage girls.


Stoke Crown Court, Staffordshire, heard the 12-year-old girl told the Keele University student she was '14, going on 15' after they began chatting online.

Glyn Samuel, prosecuting, said: 'He told her he wanted to have sex with her and would like to make a sex tape with her.

Nwosu later met a 15-year-old girl from South Wales on social media between Christmas and New Year last year and asked for naked pictures. At first claimed she was 16.

'He requested pictures of her breasts and bottom, was very persistent and told her he was 18.

'She soon confessed she was only 15. He said he did not care and continued to contact her.

'The girl confirmed she sent pictures of her naked breasts. He tried to persuade her to kiss her friend in a sexual way but she would not do that.

'She never met up with him. She knew he wanted her for sexual purposes and nothing else.'

Nwosu, of Newcastle-under-Lyme, Staffordshire, admitted rape of a child under 13 and causing or inciting sexual exploitation of a 15-year-old child.

Rebecca Wade, defending, said Nwosu was an intelligent man, but was immature.

She said: 'The offences have brought shame on his family. He is an intelligent man who has made significant mistakes which will have an impact on him and the victims.'

Jailing him Judge David Fletcher said: 'It is quite clear you were attracted to teenage girls.'

A Keele University spokesman said: 'As soon as the police made the university aware of this situation the student was immediately suspended.'