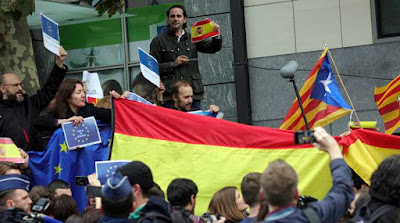 “The court plenary has just provisionally suspended the independence declaration” while it examines an appeal by the Spanish government, the source said, indicating the latest in a series of measures by Madrid to stifle the region’s independence drive.

Spain’s Supreme Court also summoned Catalonia’s former parliamentary speaker to appear for questioning this week to be charged over the region’s independence drive. Carme Forcadell and her parliamentary deputies have been summoned to appear in court on November 2 and 3, the top court said in a statement.