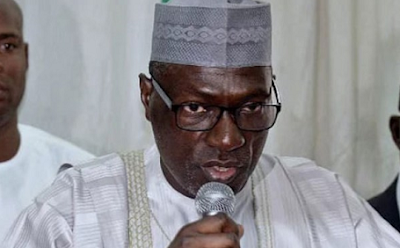 The Peoples Democratic Party, PDP, has demanded the impeachment of President Muhammadu Buhari over his response to corruption cases involving the former Secretary to the Government, Babachir Lawal, and former National Intelligence Agency, boss, Ayodele Oke.

The party, while calling for the prosecution of the duo, said Messrs. Lawal and Oke were being treated under “a different set of laws.”

The two top officials, who have been on suspension for months, were relieved of their duties on Monday by President Buhari after widespread outcry.

Mr. Babachir has since been replaced by Boss Mustapha while Nigerians await the replacement of the NIA boss.


The PDP in a statement signed by the party’s spokesperson, Dayo Adeyeye, said it was not pleased with the action.

The opposition party said the act is ‘‘an insult to the collective intelligence of the people who waited patiently for the President’s reaction to the humongous act of corruption by two of his principal aides.’’

Its statement read in part:

“First and foremost, we had disagreed with the President last year when he decided to set up the panel headed by the Vice President, Yemi Osinbajo to investigate the matter because we thought that was the wrong course of action to take.

“Ordinarily, cases of corruption or alleged cases of misappropriation of funds are supposed to be referred to institutions that are saddled with the responsibility to investigate and prosecute such matters which is the ICPC and the EFCC if there is any prima facie case against them.

“But it appears not all animals are equal under the Buhari APC administration. Some people are treated with kid gloves while others particularly those in opposition are subjected to all manner of harrowing experiences.”

It said the president’s actions were ‘impeachable.’

“This is an impeachable offence. So, the President cannot just sack Ayo Oke and Babachir Lawal and expect us to be clapping for him.

“We believe that we are operating under a democracy and a constitution that governs our affairs. To have subjected these people to different sets of rule and treatment is totally unacceptable.

“Nigerians are the same under the law and Babachir Lawal and Ayo Oke should not be tried by the Presidency while others are hounded by the EFCC and ICPC.

“These actions of Mr. President are therefore a breach of his oath of office which he swore to defend the Constitution of the Federal Republic of Nigeria and to be fair and just to all Nigerians without any discrimination whatsoever.”

“The action of the President is a gross violation of his constitutional oath and therefore constitutes a veritable ground for impeachment .Using and applying different laws to different people in the country is a direct assault on the constitution and the rule of law.

“Consequently, we call on the National Assembly to begin processes to impeach the President for breach of the Constitution and fragrance disobedient to the laws of Nigeria.

“We totally reject these actions and the law should follow its full course on the issues of these officers. In other words, their case should be referred to the EFCC for proper investigation and trial, more so when the President has not told us what the report of the findings was.

“Nigerians are entitled to know the findings of the panel headed by the Vice President. The report should be made public since it is the people’s money that is involved.

“The President has by his actions taken Nigeria to the level of a banana republic. We are not in a banana republic, this is the Federal Republic of Nigeria. Three successive governments of the PDP did not act in the manner President Buhari is acting.”

“There is no doubt that the sudden sack of the SGF and the DG of NIA is just a consequence of the backlash on the Abdulrasheed Maina saga. Up till now there’s no answer to the pertinent questions we have asked on the Maina saga.”

“The government cares less about the feelings and opinions of Nigerians. This kind of arrogance is unprecedented in the history of this county. We again call for the arrest and investigation of the two Ministers involved in the return of Maina into the Civil Service, that is, the Minister of Interior, Bello Dambazau and Abubakar Mallami, the Attorney General of the Federation & Minister of Justice.”