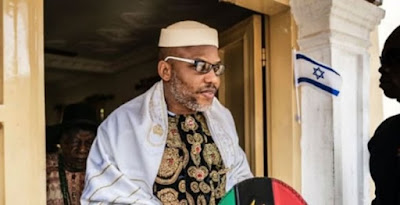 The Federal Government has replied to Senator Enyinnaya Abaribe’s application seeking to withdraw as one of the sureties for the leader of the proscribed Indigenous People of Biafra, Nnamdi Kanu, describing the application as belated.

The government, in its counter-affidavit and written address filed before the Federal High Court in Abuja to oppose Abaribe’s request, told Abaribe that Kanu was in his custody and he had to produce him for the continuation of his trial.

It stated in its counter-affidavit that Abaribe was aware that Kanu “has long violated the bail conditions handed down by this honourable court” on April 24, 2017 before September 11 when he claimed to have lost contact with the defendant.


The counter-affidavit read in part, “That it was at this point at violating the conditions at the bail that the senator surety ought to surrender the 1st defendant and or bring up this application; “That this application is belated and ill-timed;

“The applicant failed to apply to the court timeously, stating on oath that the defendant bound by recognizance to appear before this court had violated the bail condition given by this court.”

The prosecuting counsel, Mr. Shuaibu Labaran, argued in the written address that Abaribe “failed woefully” by allegedly aiding and abetting Kanu to flout his bail conditions.

The written address stated, “My lord, the surety has failed woefully to abide by the terms of the contract he entered into with this court and therefore cannot claim frustration.

“My lord, we urge that the court hold, that surety having refused to do what he ought to have done pursuant to section 174 of the Administration of Criminal Justice Act 2015 aided and abetted the 1st defendant in the flouting of the bail conditions of this court and should forfeit the bond he entered into.”

Denying that Kanu was not in the custody of the Nigerian Army, the Federal Government stated in its counter-affidavit that the defendant remained in Abaribe’s custody.

“That the military activities in Abia State tagged ‘Operation Python Dance II’ was a routine exercise in its second year carried out by the military at the end of every year.

“That the 1st defendant is not in the custody of the Nigerian military or any other security agency in that regard.

“That the 1st defendant is in custody of the applicant (Abaribe).”

Kanu was absent from court when his case came up on October 17, 2017, but his co-defendants with whom he was being prosecuted on charges of treasonable felony were produced in court by prison officials.

Abaribe’s lawyer, Ogechi Ogunna, informed the court of the motion by his client seeking to withdraw as Kanu’s surety but the judge said she would not hear it until the senator first produced the missing defendant.

She gave Abaribe and the two other sureties up till November 20 to produce the defendant in court.

Meanwhile, the Indigenous People of Biafra on Sunday insisted that the Federal Government of President Muhammadu Buhari knew the whereabouts of its leader, Nnamdi Kanu.

It asked the government to produce Kanu without further delay in order not to provoke the group to go into armed conflict with the government.

In a statement made available to our correspondent in Awka, Anambra State by the group’s Media and Publicity Secretary, Emma Powerful, IPOB accused Buhari and some leaders in the South-East geopolitical zone of conspiracy of silence on the issue.

The statement read, “We are asking Maj.-Gen. Muhammadu Buhari, Nnia Nwodo and South-East governors to produce Nnamdi Kanu because they or their representatives all participated in countless meetings in Abuja and Enugu where the modus operandi of the genocidal Operation Python Dance II was agreed and ratified.

“It was as a direct result of military invasion of the home of Mazi Nnamdi Kanu and massacre of 28 innocent unarmed civilians with many missing that has led us to once again politely ask that our leader be presented to us dead or alive.

“It is becoming clear to everybody that Muhammadu Buhari, Nnia Nwodo and South East governors are desperately trying to draw IPOB into armed confrontation and militancy to justify their genocidal clampdown on innocent people of the South-East and South-South.”