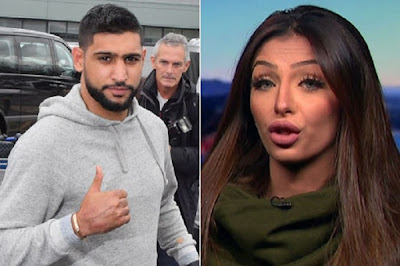 Boxing champ Amir, who has three-year-old daughter Lamaisah with his ex, sent a series of seedy messages to a teacher called Sophia and then bombarded her with late night phone calls, they claim.

Yummy mummy Sophia handed over her number to Amir after meeting him in a hotel car park and he immediately started sending over his seedy messages.

Then the welterweight world champion started lashing out at his pregnant ex, saying her obsession with surgery turned him off.


Sophia told The Star : “He said she was good-looking until she started following Kylie Jenner and changing her looks. He said she had no need for the work, then added ‘nobody would have her for a one-night stand now’, which was a rude thing to say”.

As they chatted more, Amir started to beg the slim brunette to send him raunchy videos.

He later claimed the request was sent by one of his friends as a joke.

Faryal , who denies having surgery, had pleaded with the boxing champ not to divorce her following weeks of bitter back-and-forths on Twitter, starting in August.

But the 30-year-old Olympian threw his estranged wife's apology back in her face last month when he insisted the divorce is still going ahead.