Rita Ora Hails Women For Speaking Out Against Weinstein, As Police Step In

Rita Ora Hails Women For Speaking Out Against Weinstein, As Police Step In 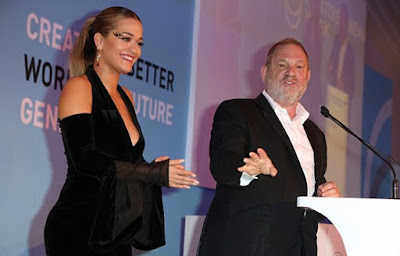 She worked with the now-disgraced Hollywood producer Harvey Weinstein on the gritty boxing film Southpaw in 2015.

And Rita Ora has now opened up about her experience with the mogul after more than 20 women accused him of sexual assault, harassment and even rape.

The singer, 26, said on Jonathan Ross's chat show - which will air on Saturday evening - that Weinstein has never acted inappropriately towards her in the years they have worked and partied together.

Joined on the sofa by Ed Sheeran, Russell Howard and Gordon Ramsay, Rita said of the Hollywood scandal: 'It's insane.'


When asked if she was on the receiving end of any untoward behaviour from Weinstein, she said: 'I did not encounter that. And I value everybody's confidence in coming out and being brave and showing their independence.

'And I think it's an incredible time right now, especially in the world, to really prove yourselves and stick up for who you are and what you believe in.'

The Hot Right Now songstress added: 'The world is a crazy place, life is crazy isn't it? And you just never really know anything really do you?

'I love my family, I do everything for my family and so I think that's what helps me go to sleep at night.'

Rita's insight comes as the Metropolitan Police announced it is reviewing an allegation against the producer dating back to the 1980s.