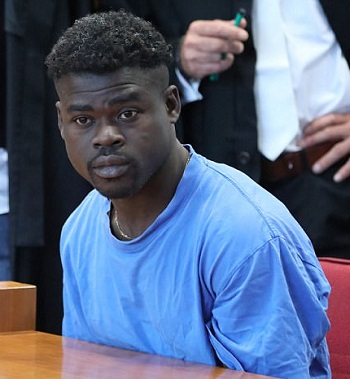 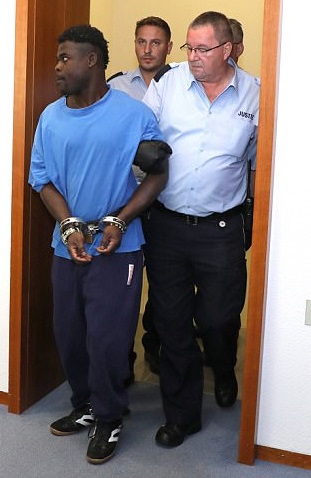 A court in Germany has sentenced a Ghanaian refugee to nearly 12 years in jail for the campsite rape of a young woman in front of her boyfriend.

He denied to the end being responsible despite the testimony from an expert saying the chance of someone else's DNA being on the victim was a 30 billion to one chance.

And X insulted his victim by saying: 'If the court says the DNA fits, then I have to call the girl a prostitute. Anyone who supports this girl who claims to have been raped is the dirtiest person on earth.'


X struck in April this year at a campsite near the city on the Rhine, dragging the 23-year-old woman from the tent she was sharing with her boyfriend.

A major scandal ensued when it emerged police refused to take seriously a 999 call from her partner saying his girlfriend was being raped yards from him.

'You are not f***ing with me I hope?' said the officer who took the call.

The terrified young man had been threatened with a machete when the Ghanaian refugee entered the tent and told him to remain where he was.

The attacker dragged the girl a few yards into a meadow at the Siegaue Nature Reserve and raped her.

But the boyfriend had a hard time getting police to take him seriously.

'Hmm,' was the first reaction from the female police officer on the line. 'Where exactly is this rape happening?' she added.

The boyfriend was forced to watch as the attacker violated his lover - and the police never arrived.

The boyfriend, 26, eventually gathered her up and began walking with her along a main road looking for help.

He called police a second time - and again they were disbelieving. Finally, nearly 30 minutes later, officers arrived and the victim was taken to hospital.

A photofit picture of the attacker led to his arrest and DNA testing confirmed his guilt. A CD player he stole from the tent was found at his refugee centre.

He tried to flee when police moved in to arrest him, flinging a rucksack at one officer. Just sad.