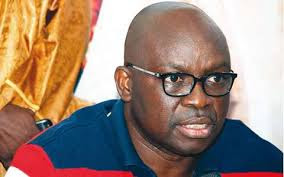 The governor handed over the keys to new Kia Rio cars shortly after a thanksgiving service to mark his third anniversary in office at the Government House.

The officials were released on Wednesday after spending 14 days in the custody of the Economic and Financial Crimes Commission. They were quizzed for alleged mismanagement of state funds.


Fayose said the duo deserved to be so rewarded for “enduring maltreatment, harassment, intimidation and oppression from the EFCC.”

Alleging that the arrest of the officials was illegal because only the state’s House of Assembly could raise questions about the Ekiti financial status, he added that the state government would sue the EFCC for acting beyond its powers.