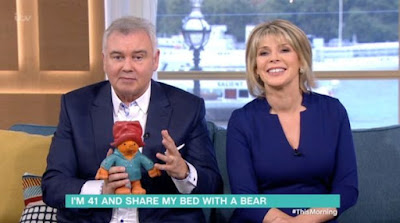 This Morning viewers have mocked a woman who sleeps with her 39-year-old teddy bear. Hannah Ebelthit, 41, shares her bed with her despairing husband and the bizarre looking Paddington Bear.

However, the most shocking part of the story was the 'disturbing' appearance of the bear that looked like a 'dirty sponge'.

Hannah, who is obsessed with her cuddly toy, revealed that her husband Wesley believes it is a "health hazard" and is worried about sleeping with it every night.

The original Paddington Bear, which she's had since the 1970s, is so old that after years of wear and tear the toy now simply resembles a piece of foam.

She revealed that son Theo doesn’t have many toys but Sam is more like her and "takes comfort" from knowing mummy has her toys.

Eamonn Holmes picked up her bear and compared it to a brand new one, with a stark contrast.

He referred to her bear as a "fillet of fish" that you would pick up at the chip shop.

They were joined by psychologist Bruce Hood, who explained why adults turn to comfort toys.

He said: "We're not sure exactly why it happens but it's a common aspect for Western children. We think it might be to do with sleeping practices . Being separated causes a degree of anxiety so they need to self soothe. What starts off as a simple aid to sleeping becomes like a living thing. This doesn’t really go away."

Hannah admitted that she would be "pretty devastated" if her bear was taken away and compared it to losing a memorable photo album. 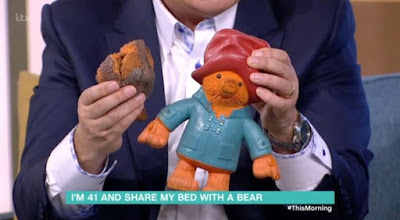