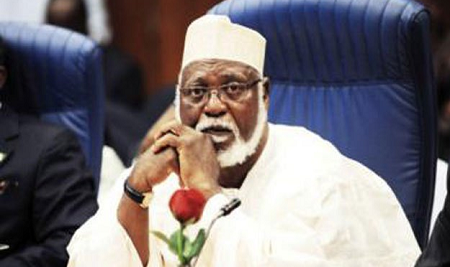 A former Head of State, Abdulsalami Abubakar, says the Peoples Democratic Party (PDP) has not properly played credible opposition role in the current politics and governance in the country.

Mr. Abubakar, a retired army general, stated this while receiving a chieftain of the party, Raymond Dokpesi, who visited him in his residence in Minna on Thursday.

He challenged PDP to assume proper opposition role, saying though no political party could remain in power forever, the main purpose of any party, whether in governance or in opposition, was to serve the people.

He said while party in governance held the “shots’’, the opposition “check`s the shots being fired to ensure that the right thing is done,’’ adding that the party should be driving force of governance.


“I must say it is very sad that you have not played your role properly in opposition,” Mr. Abubakar said.

“May be you are suffering from the shock of defeat, but I thought that at least six months down the line will have been enough to come out of the shock, to really face the governance.

“It would have been enough to perform your role in giving a credible opposition which I am afraid you have not done.

“You being one of the major parties in Nigeria and found yourself in opposition; since you did not perform that function, the smaller parties also found themselves in this way.

“I am happy now you are waking up and I hope this is the end of acrimony within your party.

“You will now come and build formidable party that will play the role of opposition.”

The former head of state noted that some aspirants interested in PDP national chairmanship had also visited him.

He expressed hope that from experience and lessons learnt during the PDP leadership crisis, the party would “now mend fences and continue to be a dominant party in Nigeria’s politics’’.

“You need now to check why you slid from ruling to opposition party to see what you have done wrong and correct with a view to learning from some of these things.”

He also advised PDP leaders and members, especially the aspirants for positions, to go to the December national convention without bitterness.

“If I am right, there are about five or six of you interested in the chairmanship position,” the former Nigerian leader said.

“You have your visions and aspirations which legitimately as politicians, you have the right to play a role not only in your party but in governing the country.

“I do hope that you will go through this convention without bitterness because you have seen what rancour caused the party.”

He advised the electorate to also examine critically, political parties’ manifestoes give to them during campaigns.

Mr. Abubakar urged PDP members to continue to support the party and the country.