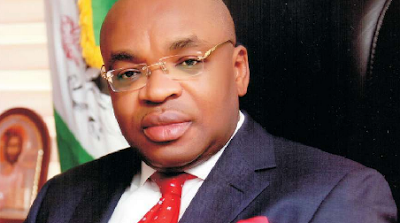 The Akwa Ibom State Governor, Udom Emmanuel, has redeemed his pledge of $10,000 per goal for the matches against Cameroon to the Super Eagles.

Governor Emmanuel had promised the players $10,000 for every goal, two days before their clash with the Indomitable Lions.

That promise did serve as a right tonic the Eagles walloped the reigning African champions 4-0 in Uyo on the first day of September, before earning a 1-1 draw with the Lions in Yaounde three days later.

With five goals in all, the Super Eagles have made N18 million for themselves and the governor has even promised more if the team earns a sixth FIFA World Cup appearance by winning on Saturday.