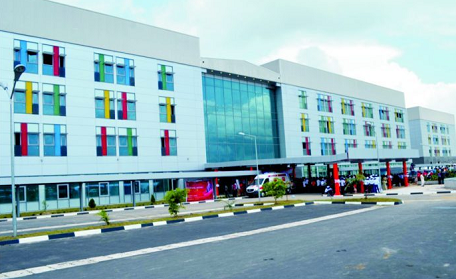 The Ibom Specialist Hospital in Uyo, Akwa Ibom State, has been shut down, just two years after it was built and commissioned by the administration of former governor Godswill Akpabio.

Almost all the health workers in the hospital were foreigners, mostly from India, Premium Times reports.

Mr. Akpabio had boasted that the hospital, which he described as ‘world class’, was better equipped and higher in status than university teaching hospitals in Nigeria, and that it was going to promote medical tourism in the country.

The multi-million dollar hospital was shut down in September after its private managers terminated their contract with the state government and withdrew from the facility, Premium Times says.


When Premium Times visited the hospital on Monday evening, the facility was locked down; apart from the security officials, not a single person was inside its massive buildings.

Visitors were also not allowed entry.

Some persons who had worked in the hospital told Premium Times that the private managers – Cardiocare Medical Services Ltd – left because of unresolved issues bordering on funding by the state government.

The Commissioner for Health in the state, Dominic Ukpong, also confirmed on Wednesday to the newspaper that the hospital has been closed down. Pretty sad.