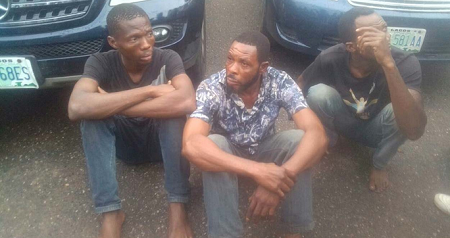 The Lagos State police command has arrested two Uber drivers who specialised in robbing women of their valuables at gunpoint.

The drivers, Fosta Rufus, 30, and Franklin Jogbodo, according to the Special Anti Robbery squad boss, Mohammed Sanusi, picked up their targets around Lekki, Ajah and Victoria Island areas of Lagos.

This is the second of such arrest of Uber drivers in Lagos. It was gathered that the suspects were accused of robbing their victims of valuables such as jewelry, expensive phones and cash, and their victims are mainly ladies who go out at night.


Lagos State police boss, Imohimi Edgal, who paraded the suspects at the Command Headquarters, Ikeja, said the suspects sometimes would follow their victims to an ATM machine from where they would force them to withdraw cash at gunpoint.

He added that the suspects have admitted participating in three different robbery operations in the past. “On one occasion the suspects collected the sum of N86,000 from their victim using her Access Bank ATM. They have both confessed to the crime.”

He said that a KIA Rio with registration number BDG 376 EP used in perpetrating the crime and other valuables, which including Samsung Galaxy 7edge plus and iPhone 6 plus, allegedly collected from their victims identified as Nancy Nzuegbo and Eze Chinonso, were recovered from the suspects.

The Lagos police boss said he has directed all Area Commanders and Divisional Police Officers to maintain police visibility in major roads and neighbourhood across the metropolis.

“I have also directed them to carry out constant raids of back spots. We hope to sustain the current low crime rate in the state” he said.

In his confessional statement, Franklin denied robbing anybody, saying it was his friend, Fosta who dragged him into the problem. He said he was the one who introduced Fosta into the Uber cab business.

According to him: “I met Fosta while working with UBA as a driver. I met him again sometime this year. I helped him to register as an Uber driver. It was him who collected the phones that were found on us from some ladies.