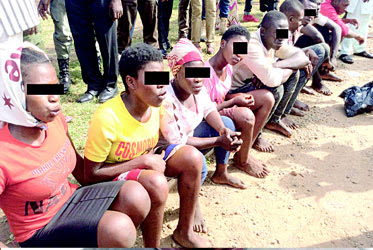 Four female cult members were, weekend, arrested by the Benue State Police Command alongside five other male accomplices during an initiation ceremony at Aune-Adoka in Otukpo Local Government Area of the state.

Parading the suspects at the Command Headquartres in Makurdi, the Police Commissioner, Bashir Makama, said the gang was arrested with various charms and tools being used for the ritual. Makama said: “They were arrested by our men on patrol in the area.

“Already some of them have confessed to being members of the Red Aye cult group and they are also helping our investigations to apprehend other members of the cult gang, who have, in recent times, been tormenting their communities and its environs.”


Speaking on her involvement and role in the gang, one of the arrested ladies, Onyechai, said she was cajoled into joining the group.

Her words: “Many of us were forced to join the group. Some of my friends told me that some of the men threatened them until they were initiated. “I did not intentionally join the group.

I was forced to join them after they threatened me. That is what they did to some of us to join. It is not my fault, but I regret all my actions.”

The Police Commissioner explained that all the suspects will be charged to court as soon as investigations into the matter are concluded.