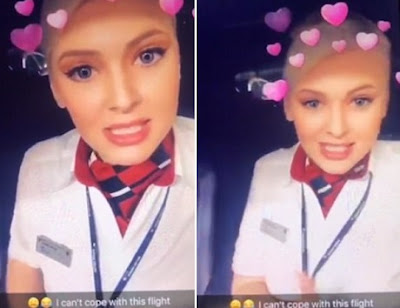 British Airways has sacked a stewardess who posted a racist Snapchat rant attacking Nigerian passengers after she was called in for a two-hour meeting with bosses.

Joanne Wickenden sparked outrage after recording the racist clip in her BA uniform before flying from London Heathrow to Abuja on Friday night.

In a statement today the airline said 'she no longer works for British Airways', adding: '​We expect the utmost professionalism from our staff when they are representing British Airways.'

The 23-year-old, who wants to be an actress, told friends 'I am not a racist' and claimed the sickening video was just a joke.

She told MailOnline: 'I have been framed by another BA employee. They were encouraging me, egging me on to say things. They were recording me and sent it around to our friends.'

She added: 'I don't want to fly anymore.'

A friend said that the other colleague wanted her to impersonate what goes on on the flight.