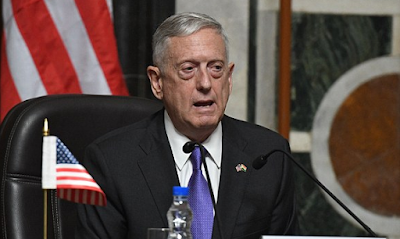 Six rockets landed near Kabul's international airport today after US Defense Secretary Jim Mattis flew to the Afghan capital for talks, an official has said.

The volley of missiles struck near the military section of the airport but there were no casualties or immediate claim of responsibility, said interior ministry spokesman Najib Danish.

Police have cordoned off the area to find the exact location from which the rockets were fired.

The attack came hours after Mattis arrived in the Afghan capital, the first member of Donald Trump's cabinet to visit the war-torn country since his pledge to stay the course in America's longest war.


Officials say the airport and immediate area is being evacuated and all flights have been cancelled.

The unannounced high-level visit comes as Afghanistan's beleaguered security forces struggle to beat back the Taliban, which has been on the offensive since the withdrawal of US-led NATO combat troops at the end of 2014.