Why I Refused To Accept INEC’s Service – Melaye

Why I Refused To Accept INEC’s Service – Melaye 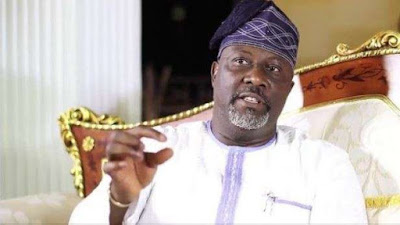 Senator Dino Melaye, on Monday gave reasons why he has refused to accept the service of petition from the electoral commission, INEC, for his recall.

Mr. Melaye stated this while briefing journalists in Abuja on Monday.

The senator, who represents Kogi West Senatorial District, is facing a recall by his constituents who in a petition on June 23, 2017, called on INEC to recall him.

He was accused of poor of representation of the constituency at the Senate.


On Monday, Mr. Melaye told journalists that accepting any “purported’’ petition from INEC would amount to breaching the 1999 Constitution (Amended).

According to him, the window provided by the Constitution for the service of recall petition had elapsed and “I would not be seen to be breaching the law.”

The senator’s stance comes despite the fact that it was his suit filed at the court that eventually led to INEC suspending the recall process, before the Federal High Court eventually asked that it continues.

“It is clear that by the provisions of Section 69(b) of the 1999 Constitution, INEC must act on the petition purportedly presented to it on June 23, 2017 by conducting a referendum within 90 days of receipt of the petition,” Mr. Melaye argued.

“The 90 days period as provided for in the Constitution for conducting the referendum after our verification, elapsed on Sept. 23, 2017.

“The time having elapsed, I cannot under the circumstance, aid and abet INEC to further infringe on the provisions of the Constitution, which I have sworn to defend,’’ he said.

The lawmaker pointed out that his position on the matter had been affirmed by various Supreme Court decisions.

He cited the case of Nyako v. Adamawa State House of Assembly and others (2016) and All Nigeria Peoples Party (ANPP) v. Alhaji Mohammed Goni and others.

He said that from the apex court’s decision, the Constitution could not be amended by “mere’’ pronouncement of a court of law.

Mr. Melaye added that it was only right to respect the provision of the Constitution.

“The trial judge failed to respect that provision of the Constitution when he elongated 90 days provided for, saying the process was paused when the interim order for maintenance of status quo was granted.

“I am not evading the service of any purported petition on me by INEC.

“I have also instructed my lawyer to challenge the jurisdiction of the trial court to entertain an ex parte application for the service on me.

“In view of the lapse of time, I shall no longer be in a haste to take any further step in this matter so as not to aid any party, especially INEC in breaching the Constitution,’’ he said.

Melaye said that having asked his lawyer to file appeal against the judgment by the court, he was aware that the matter was subjudice.

He added that it was in view of that that he chose to speak only on the “socio-political aspect’’ of the matter.