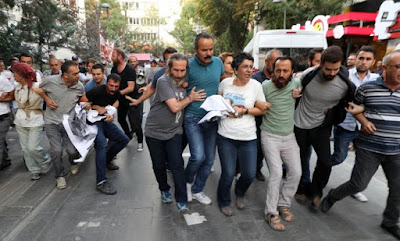 A Turkish court on Thursday jailed on terror charges 14 lawyers representing two detained teachers who have been on hunger strike for six months after being fired in a mass crackdown on the public sector.

More than 140,000 public sector workers were sacked or suspended by Turkey under a state of emergency imposed following last July's failed coup against Erdogan.

The case of Nuriye Gulmen and Semih Ozakca has become a rallying cry for critics of Turkey's authoritarian policies in the crackdown.

The pair, who began a hunger strike protest in March, were jailed on terror charges in May and went on trial on September 14 but were not present in court amid health concerns.


Two days before the trial began, sixteen lawyers from the Office of People's Rights (HHB) that represents them were detained.

A court in Istanbul ordered 14 of the lawyers to be imprisoned on charges of "membership of an armed terror group" while two were released.

The lawyers are accused of links to the Revolutionary People's Liberation Party-Front (DHKP-C), an outlawed Marxist group that has carried out sporadic attacks.

The HHB is also accused of being part of the DHKP-C, together with Gulmen and Ozakca, accusations they vehemently deny.

"We only have one answer, to organise ourselves even more and to step up our fight for justice," the HHB wrote on its Twitter account.

The next hearing in the trial of Gulmen, an academic and Ozakca, a former primary school teacher, will take place on September 28.