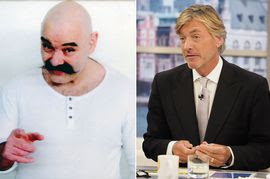 Charles Bronson is suing Richard Madeley for defamation after something he said about him on Good Morning Britain.

It was wrongly reported on the ITV show last year that the notorious prisoner - who has changed his name to Charles Salvador in tribute to his love of art - had attacked a prison governor.

The hard man, 64, is now claiming that Richard slandered his name. It came as Richard was interviewing former Coronation Street star Paula Williamson , who is engaged to Bronson.

He told the 37-year-old: "He keeps reoffending. We have his charge sheet. In his last incident he attacked a prison governor last year."


Paula told the host that her fiancé hadn't committed an offence since 2013, and at that point, Richard looked into the camera and said: "Charlie, you're watching now. You're lying.