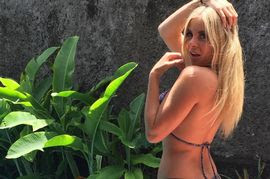 A 22-year-old bikini model was killed instantly when the supercar she was a passenger in burst into flames in a horror crash after a night out.

Bree Keller, who was just 22, died in the collision in Sydney, Australia, on Saturday. Her family say they have no idea why she was in the car with three men, who she did not know.

The tragedy also claimed the lives of two men, brothers Steve and Jeff Nasr. In a heartbreaking TV interview, her stepfather, Peter Francis, told Channel Ten: "We have no idea how she came to get in that car. We don't know any of the people in that car except Breeana.


"She didn't know them either, so we're just at a loss – we can't believe it.

"It's a tremendous loss to us. It's just a waste, an absolute waste and a tragic mistake."
A third man, Joseph Bagala, 39, survived the horrific collision after being pulled out by police officers.

The car had been purchased just six days earlier, it has emerged.